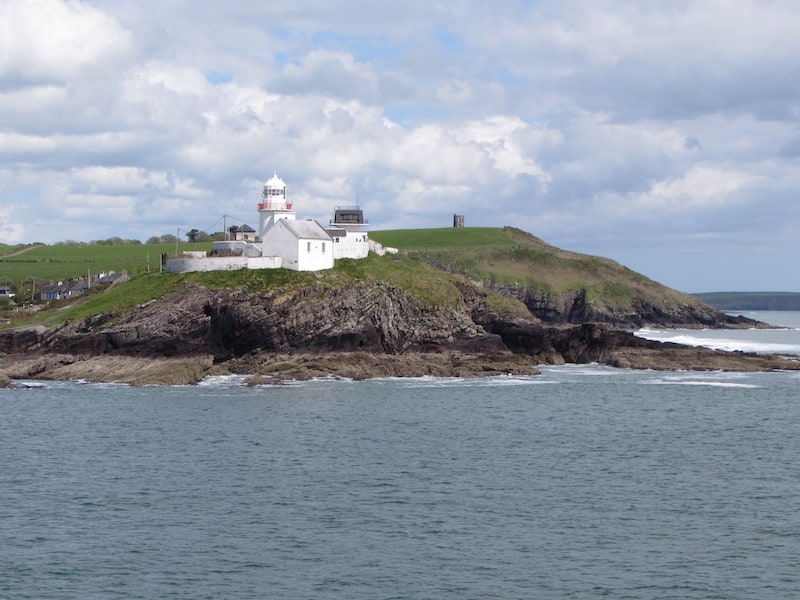 Guest contributors John and Sandra Nowlan’s Tauck small ship cruise to the British Irish Isles was ultra-rich in history and culture but devoid of the hassles ordinarily encountered on other planned tours.

The Channel Islands: The only part of Britain that was occupied by German Forces in World War II. It was just one remarkable stop on a Tauck small ship cruise called Treasures of the British Irish Isles. History and culture were combined with luxury and all-inclusive pampering.

When small is beautiful

Tauck, founded in New England in 1925, has evolved into a major international provider of fully guided land tours, river cruises and, more recently, small ship ocean cruises that specialize in innovative itineraries that wouldn’t be possible with bigger ships.

A Tauck small ship cruise is especially attractive because everything is taken care of – airport pickups and transfers, top hotels before and after the cruise, wine with lunch and dinner and all gratuities. In our case, we flew to London where Tauck arranged special tours of Henry VIII’s Hampton Court Palace and a private visit to the Tower of London, including the Crown Jewels, avoiding the usual crowds. 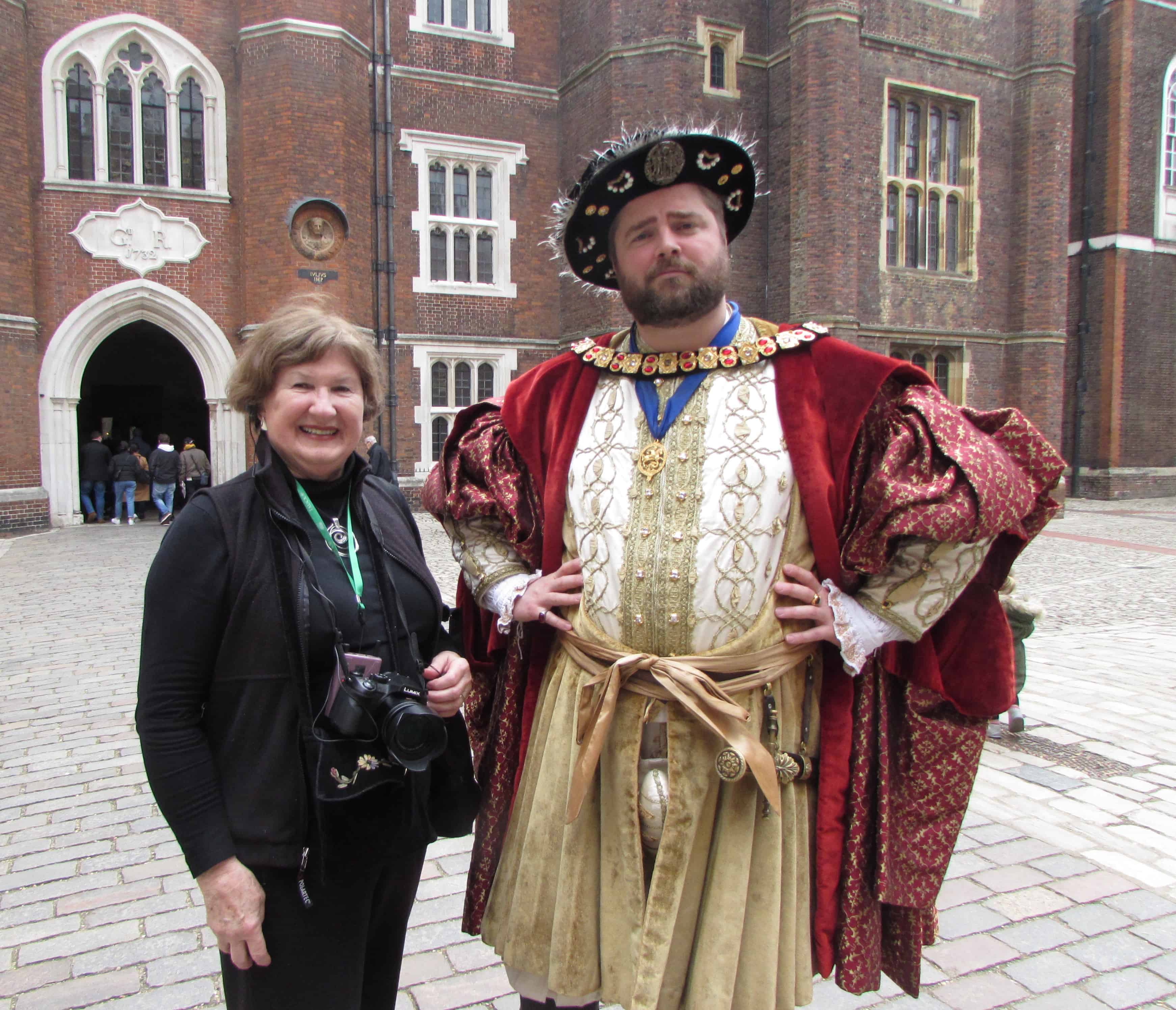 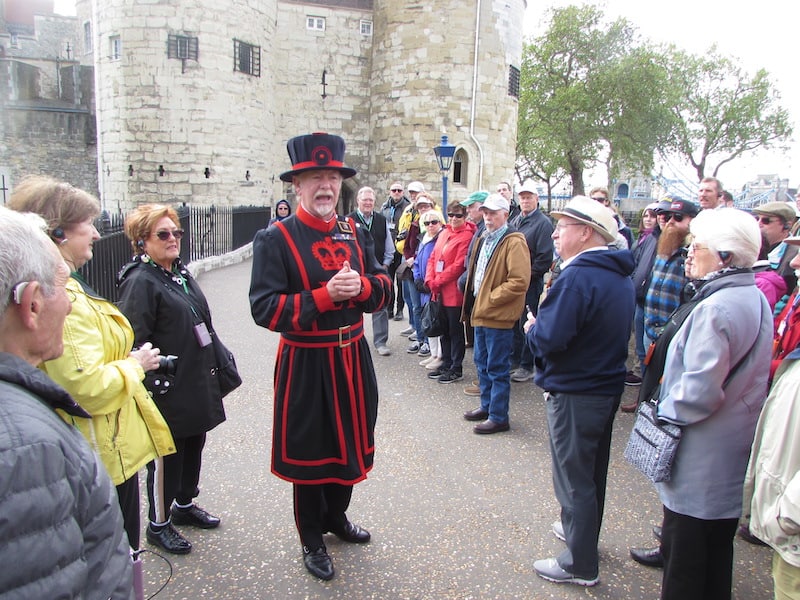 A private Tauck guide at the Tower of London

After two nights at the five-star Hyatt Regency London Churchill Hotel, we transferred by bus to Portsmouth for a crossing to Guernsey, a British Crown Dependency in the Channel Islands, just off the coast of Normandy. Our ship,  L’Austral, was one of several identical and elegant 200-passenger, yacht-like vessels that are regularly leased by Tauck from the French cruise company, Ponant.

The occupation of Guernsey and the slightly larger Channel Island, Jersey, gave Hitler visions of a fully conquered Britain. After taking control, he ordered massive fortifications, well beyond the strategic value of the islands. Slave labor built gun mounts along the coast, secure observation posts and miles of hidden tunnels for protection, storage of oil and ammunition and as a hospital. 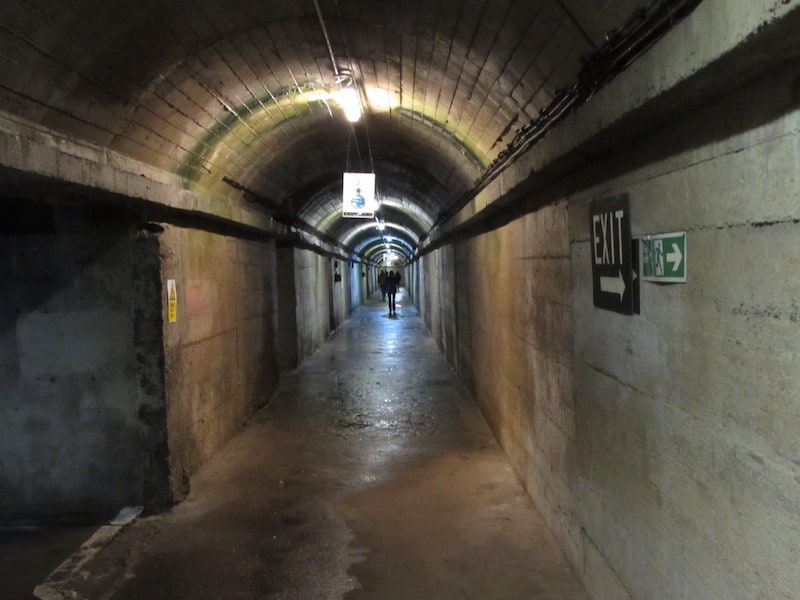 One of the outstanding tours offered by Tauck took visitors along the coast to view the fortifications (still remarkably intact) and into several of the deep, claustrophobic tunnels, many of which have memorabilia from the war years, including local English newspapers filled with German propaganda. 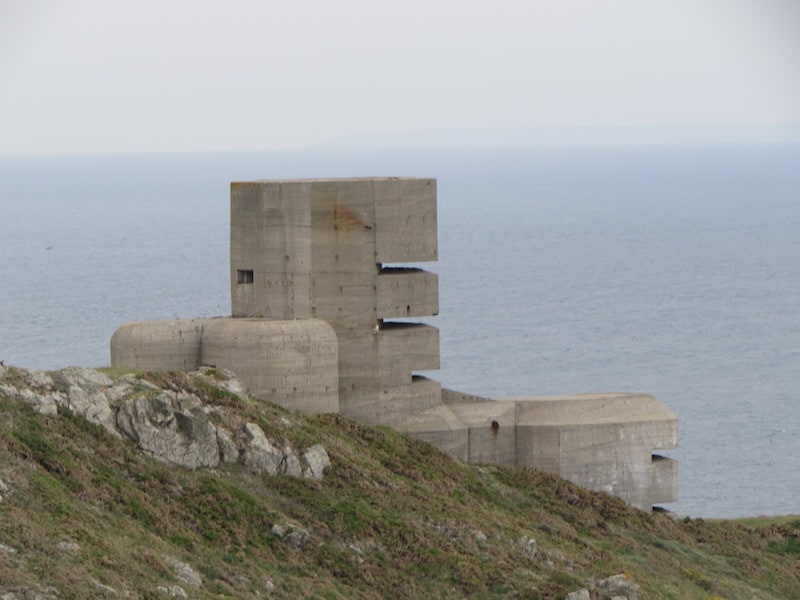 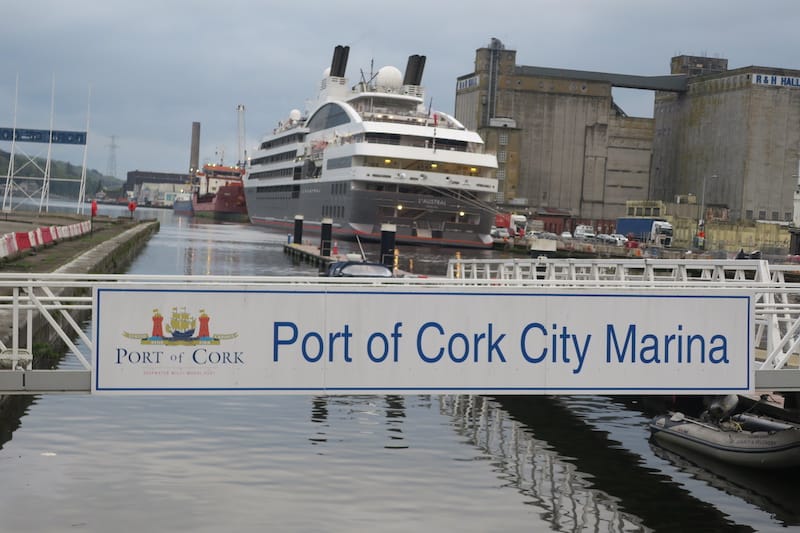 After Guernsey, we had to cancel a stop in the Scilly Isles (seas too rough to land) before heading to historic Cork, Ireland’s second largest city. One of the highlight tours was a visit to nearby Blarney Castle where braver guests chose to wiggle their way into an uncomfortable upside down position to kiss the Blarney Stone. 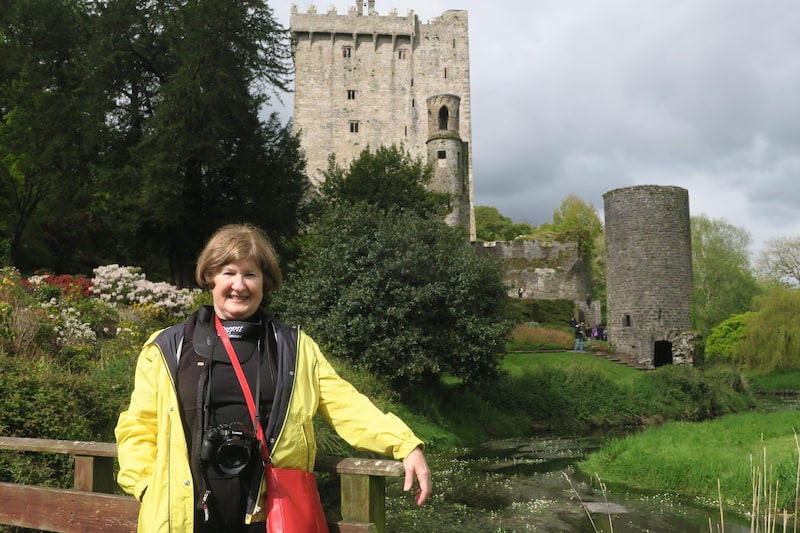 Sailing from Cork to the mouth of the River Lee, we passed Cobh (formerly Queenstown), the Titanic’s final port, where the “unsinkable” ship took on 123 additional passengers on April 11, 1912. It was emotional seeing the cliffs and lighthouse at the harbor entrance, knowing it was the last view of land for more than 1500 doomed passengers and crew.

The next morning we arrived at another historic port, the city of Liverpool, best known as the original British headquarters of the Cunard Line, founded by the Canadian sailing and steamship magnate, Sir Samuel Cunard. 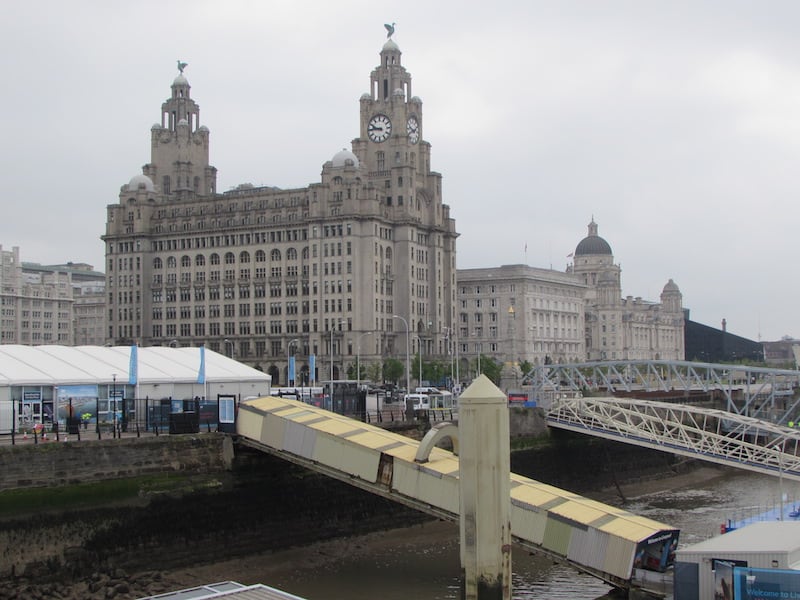 Landing in Liverpool (Cunard Building on the right)

As expected, many Tauck guests chose the Beatles tour, visiting their museum and iconic locations like Penny Lane and Strawberry Fields. Because we’ve visited Liverpool in the past we took the tour to nearby Chester, the ancient Roman walled town that has done a remarkable job keeping its past intact. Many of the homes and stores were half-timbered black and white buildings from medieval times. 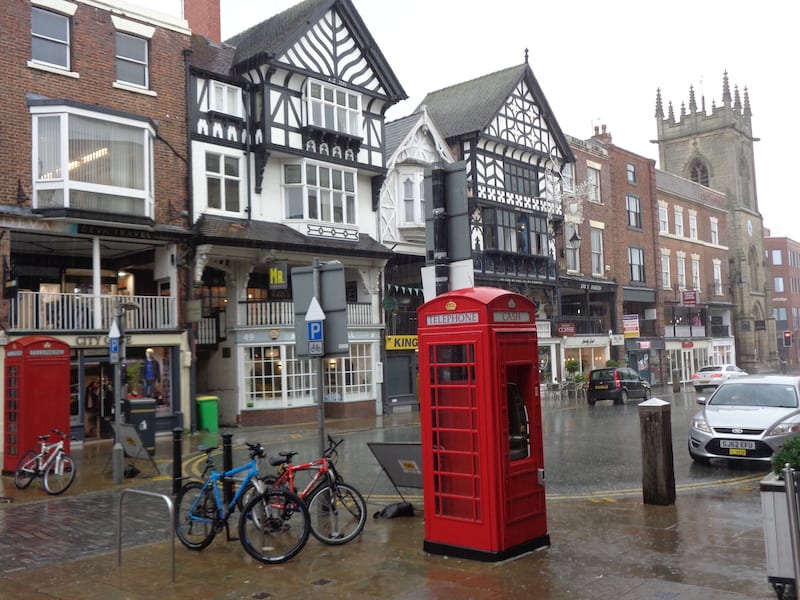 Historic Chester in the Rain

The following day, because of L’Austral’s compact size, we were able to visit another British Crown Dependency, the Isle of Man, in the northern part of the Irish Sea. Tauck offered five different tours which emphasized the island’s British, Irish and Norse influences. We climbed into a plush compartment on the Isle of Man Steam Railway, dating from 1874, the oldest continuously operated narrow gauge railway in the British Isles. Puffing along the southeast coast, its locomotives inspired the children’s TV series, Thomas, the Tank Engine. 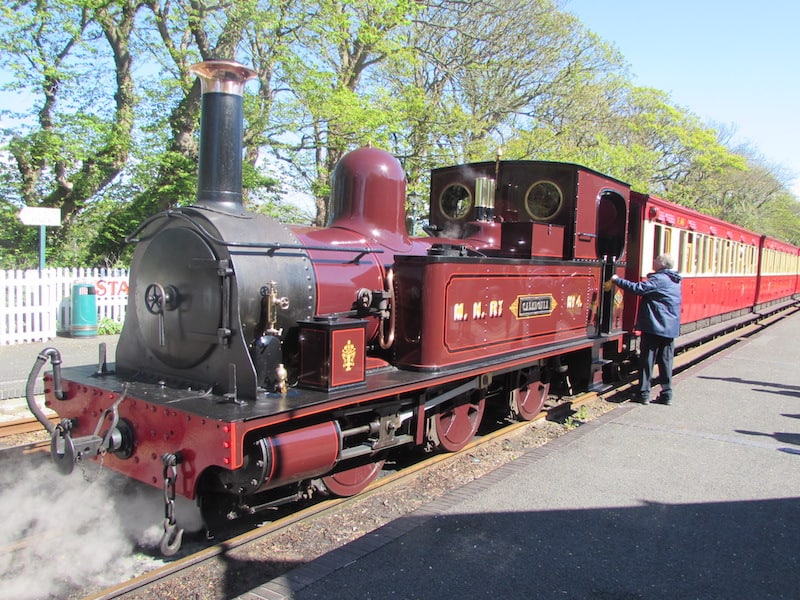 The inspiration for Thomas the Tank Engine

Our destination was Castletown and its medieval castle started in the late 12th-century, one of the best preserved in Europe. 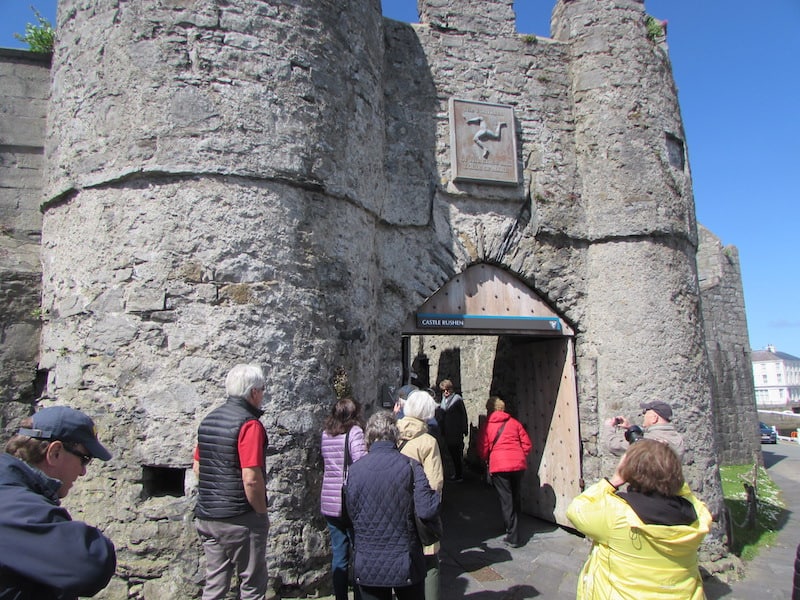 Northern Ireland was our next destination with excellent tours in the capital, Belfast. “The Titanic Trail” included a visit to the area of the ‘The Troubles” where graffiti-filled high walls still separate the traditional Catholic and Protestant sections. But the highlight was the Titanic Museum, built in the shape and height of the famous trio of Harland & Wolff ships – Olympic, Titanic and Britannic. 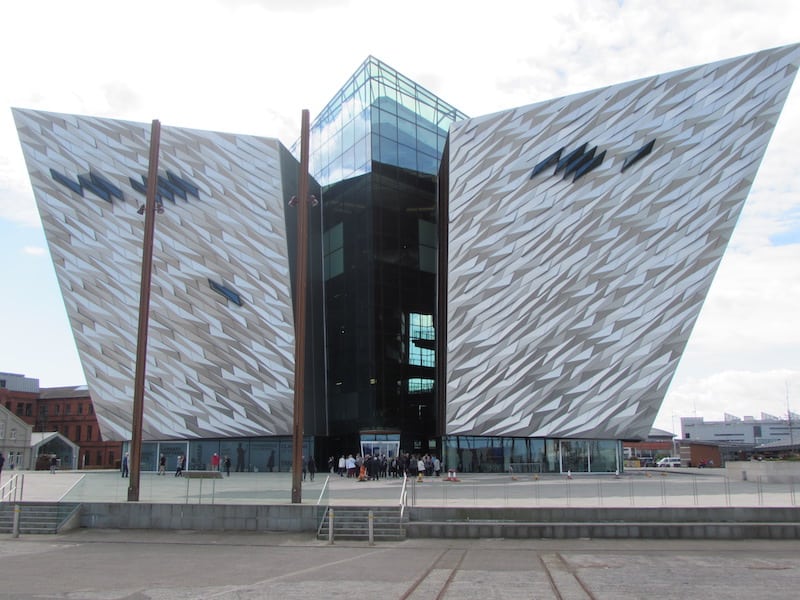 Titanic Museum exterior, like the bows of Titanic and Olympic

The whole Titanic story, from blueprints to construction to launch to the 1912 disaster and its aftermath was laid out in a series of cleverly designed rooms. From the museum, visitors can see the exacts area where Titanic was constructed and close by, the huge dry dock, the world’s largest at the time, where the ship was outfitted with its three propellers. 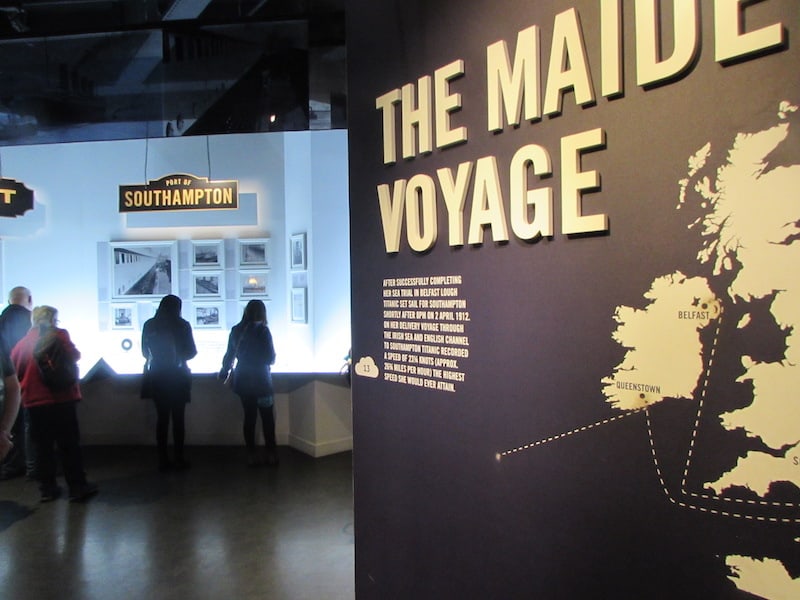 Inside the Titanic Museum

The cruise ended in Dublin, Ireland’s largest city, with a two-night stay at the wonderful The Shelbourne Dublin hotel across from St. Stephen’s Green. Tauck provided excellent local guides for an informative walking tour of the central area including a look at the famed statue of Molly Malone, selling her cockles and mussels. On our memorable last day, we toured EPIC The Irish Emigration Museum, with stories about Irish history, achievements in sports, literature, politics and science and the thousands of Irish citizens who left the Emerald Isle to emigrate to the United States, Canada and Australia. 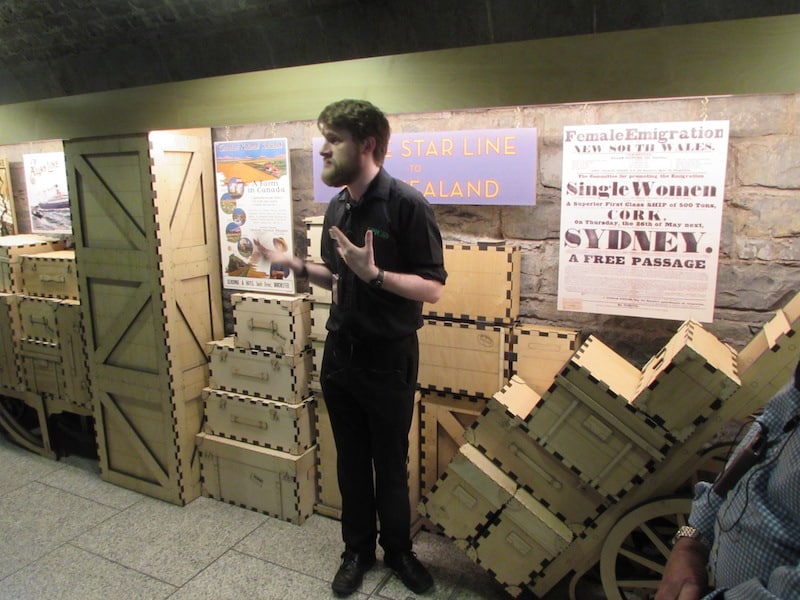 At EPIC: The Irish Emigration Museum

Local culture is always a key part of a Tauck cruise (on several occasions during our week at sea, talented musicians, singers and dancers came aboard the ship to present lively and entertaining shows) and this very special pampering continued in Dublin. 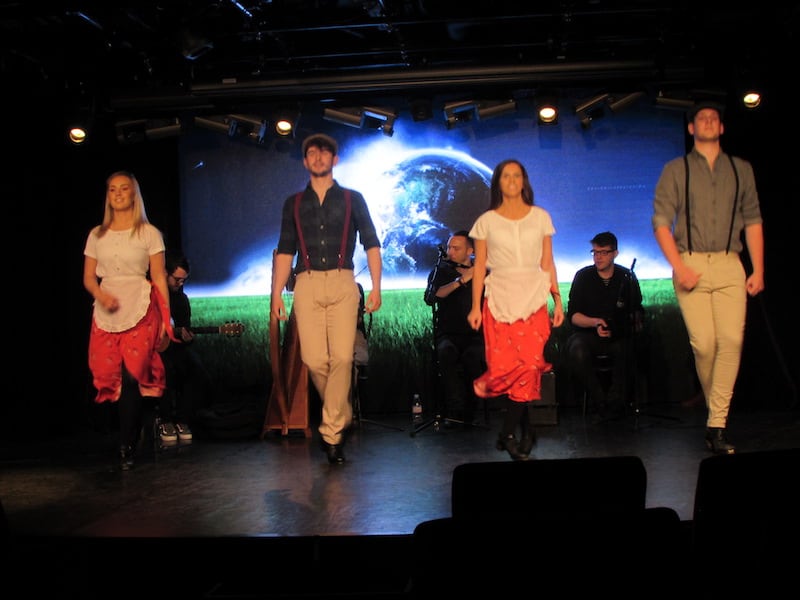 All guests were invited into the Lady Chapel of Saint Patrick’s Cathedral, part of Irish history for more than 800 years, for an exclusive concert by members of the young male choristers of St. Patrick’s. Truly heavenly.

Tauck has clearly perfected the ‘no worry’ tour because virtually every aspect of our cruise was anticipated and looked after. That’s why the company is so popular with retired and senior citizens. Sure enough, the next morning a limo arrived, right on schedule, to take us to the Dublin airport in plenty of time for our flight back to North America. We hated to leave but had to admire Tauck’s efficiency. 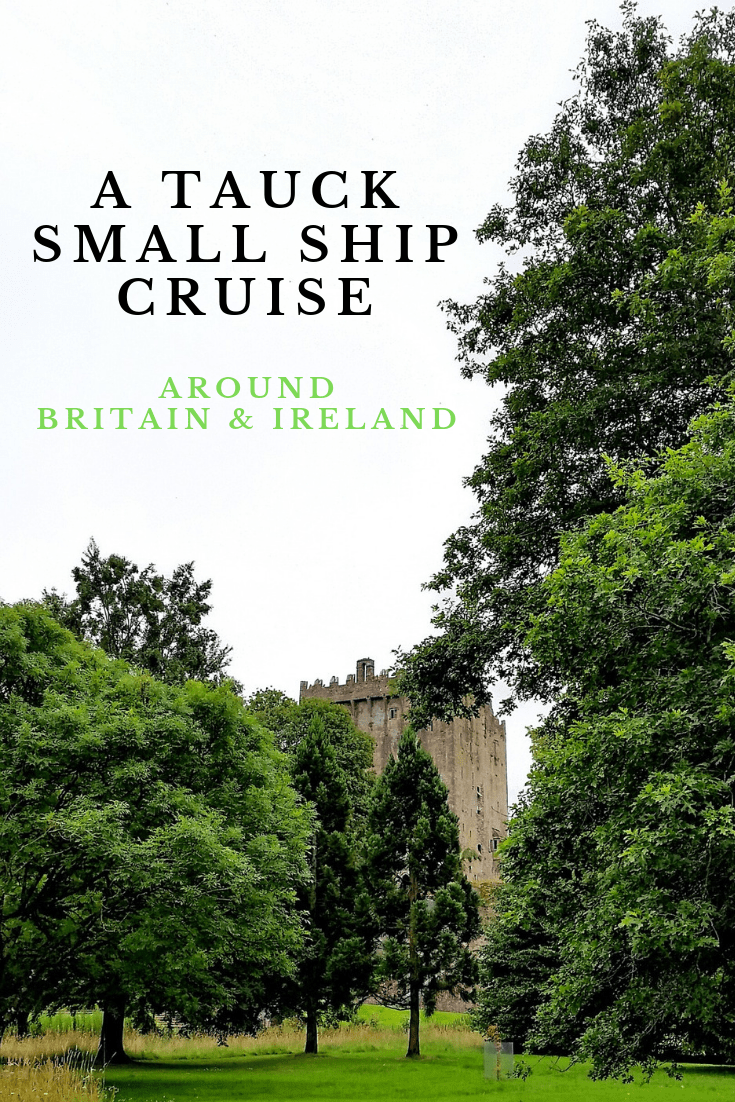 Disclosure: The Nowlans were guests of Tauck but any opinions expressed in this post are their own. 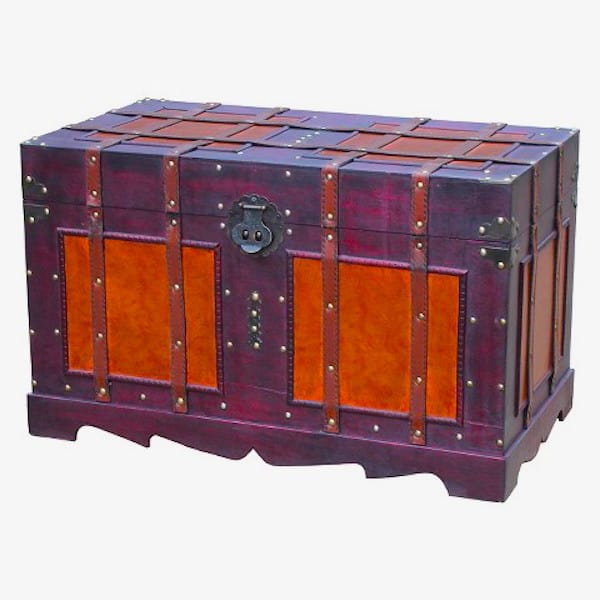 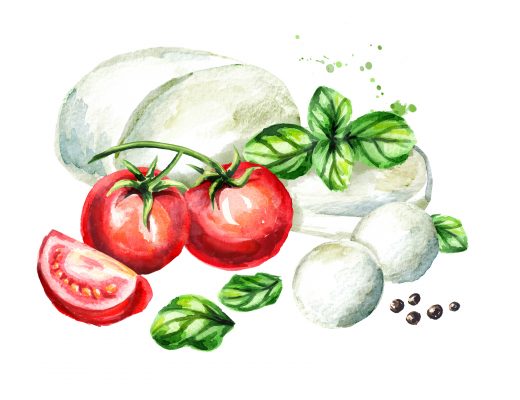 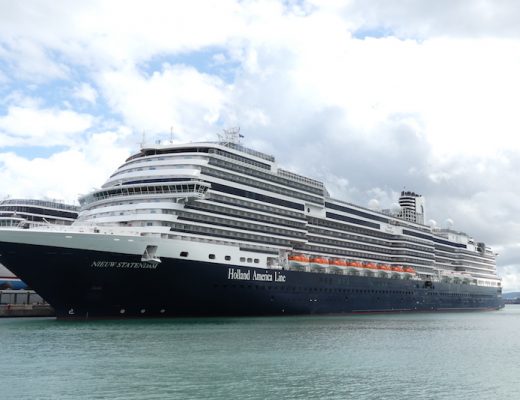 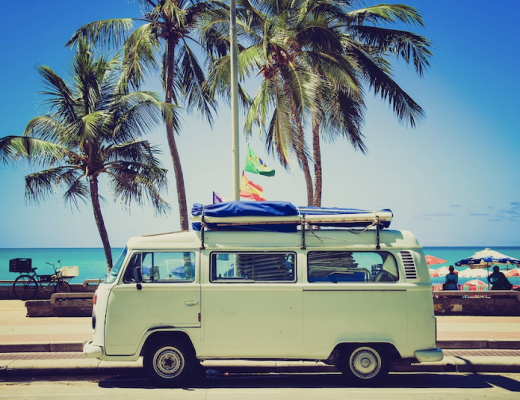 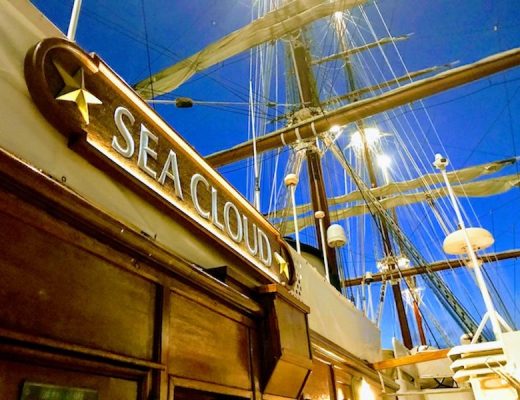