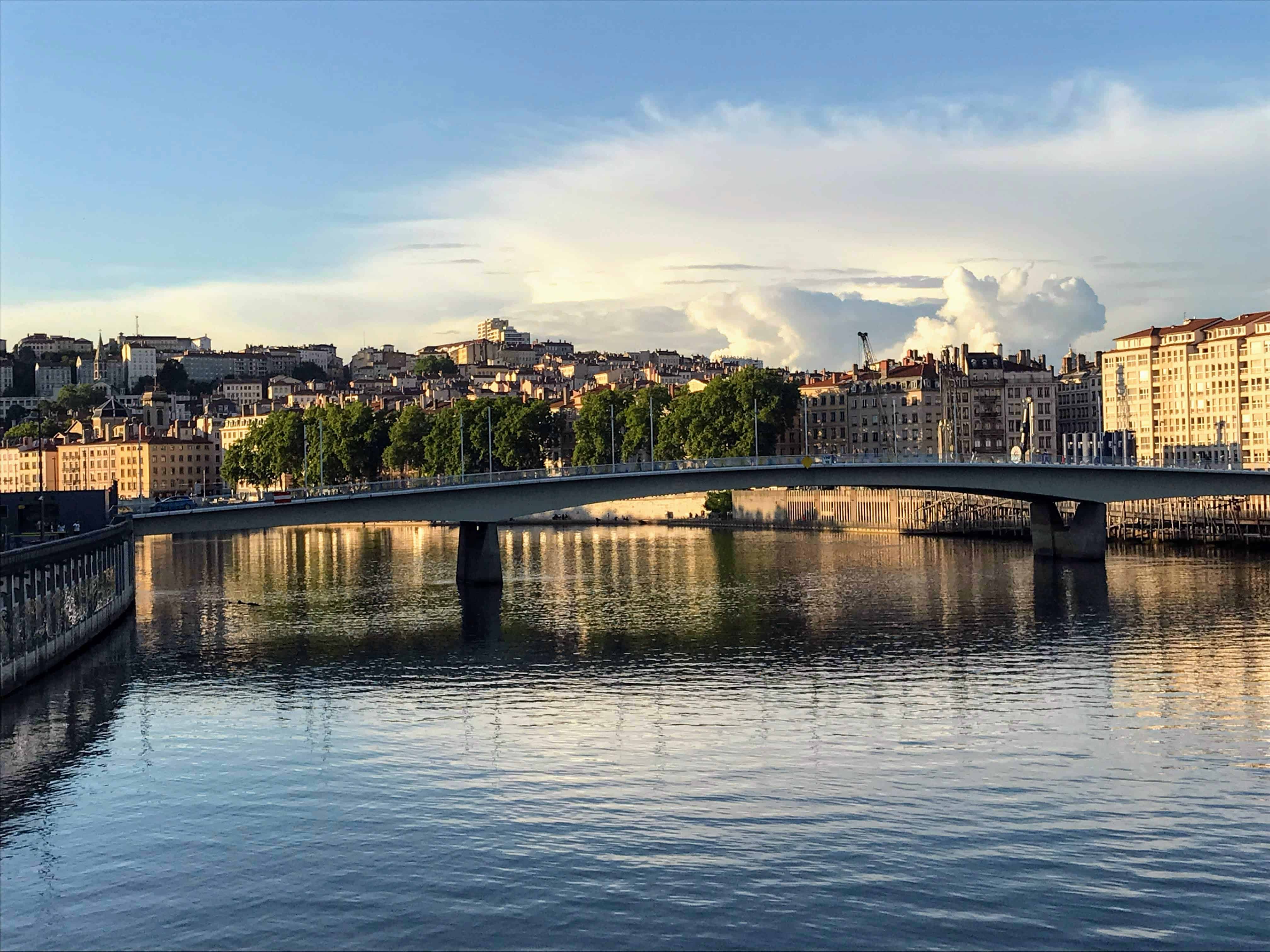 Lyon, France is one of the premier places in the world for food lovers: Even Parisians begrudgingly admit there is no better food than that found in Lyon.

We’ve written many times about the city’s historical and culinary treasures—but if you take the TGV high-speed, fast train from Paris to Lyon, half the fun of the trip is getting there! 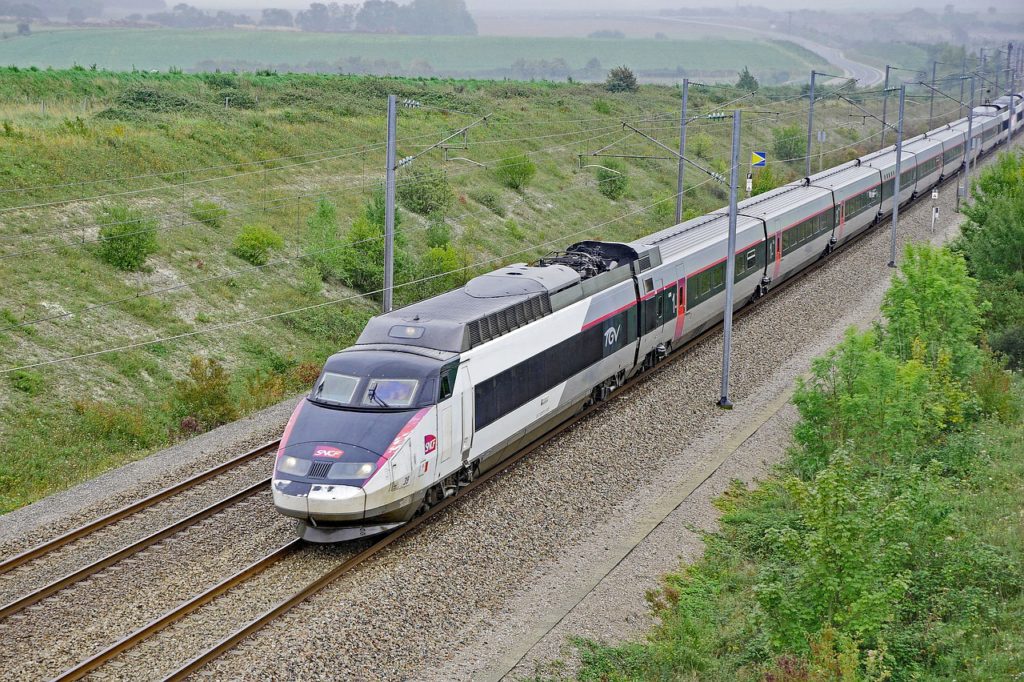 SNCF/TGV tickets can be purchased in person or online. The concierge in our hotel in Paris helped us secure tickets (although you can do-it-yourself, even from home).

We opted for luxury and purchased comfortable first-class seats for the two-hour, non-stop, just under 250-mile ride—at a cost of 54€ per person.

The high-speed train has two seating levels, upper or lower floor. You choose the one you prefer as well as the location of your seats when purchasing tickets. If you’re traveling with suitcases, it’s easier to sit on the first level, avoiding a narrow flight of stairs.

Our train, Number 6609, was scheduled to leave from the elegant, architecturally beautiful Gare de Lyon station, one of the six large railway stations in Paris. Worth a visit in its own right, it was built at the turn of the 20th century. 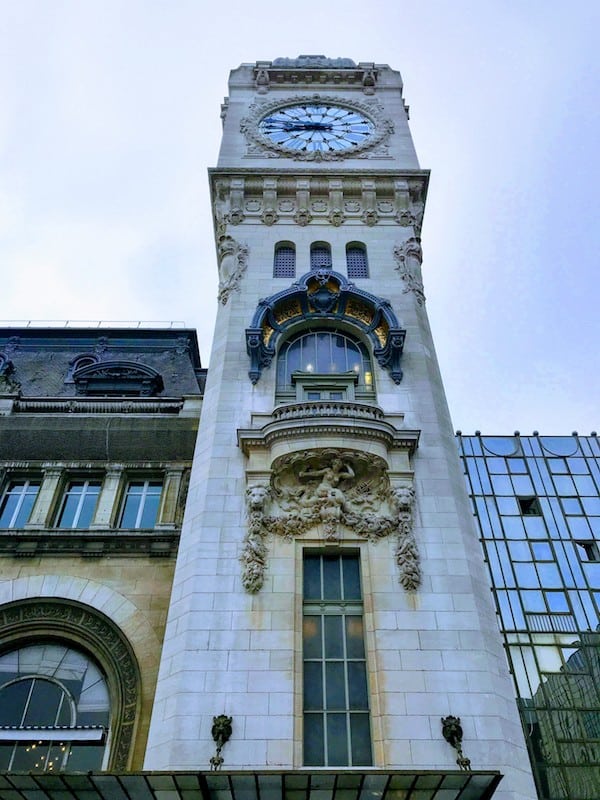 Clock atop Gare de Lyon, built in a similar style to that of Big Ben

Upon entering the station, you need to find out the number of the hall (lobby) from which your train will depart; it will be listed on one of the information boards overhead. As the time for departure approaches, another board directs you to the correct voie (train track.)

If you arrive early for your train, you’ll have a chance to poke into some of the shops or purchase a coffee and croissant at a kiosk. In addition, a full-service restaurant with excellent ratings is located at the station, Le Train Bleu, which was designated a national historic landmark in 1972. 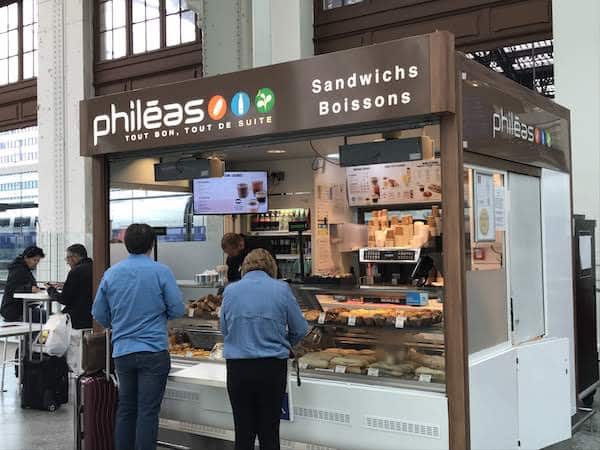 One of the kiosks at the Gare de Lyon 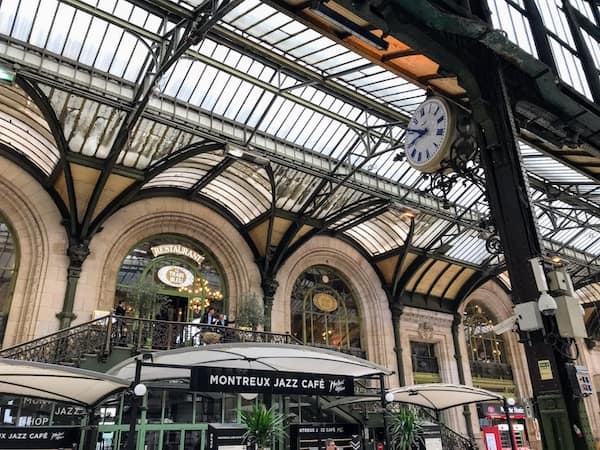 Your ticket tells you which voiture (car) you’ll be riding and the location of your seats. You pass through an automated self-service ticket scanner to get to the train platforms. Walking to our car seemed to take forever, as we passed about 20 cars. The car number is posted on an electronic board near the door of each car.

Getting onboard the fast train from Paris to Lyon 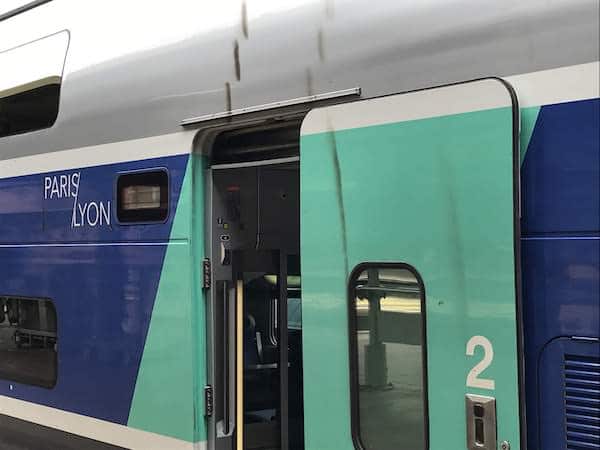 Getting ready to board

Our plush, velvet-upholstered, reclining seats on the TGV train were extremely comfortable and roomy with ample legroom. The seats allow you to recline if you want to sleep through the ride but we wouldn’t recommend that you miss the experience! 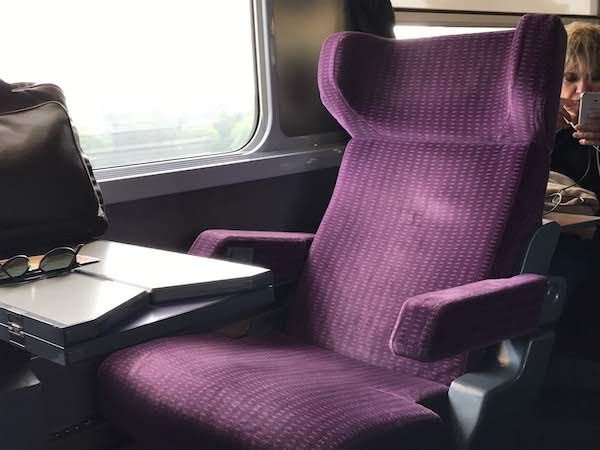 Seats on the fast train: Wish they had these on airplanes

Soon after finding our seats, we were greeted by Jean Louis, an affable train conductor who told us he would be walking through the car periodically in case we needed anything or had any questions. 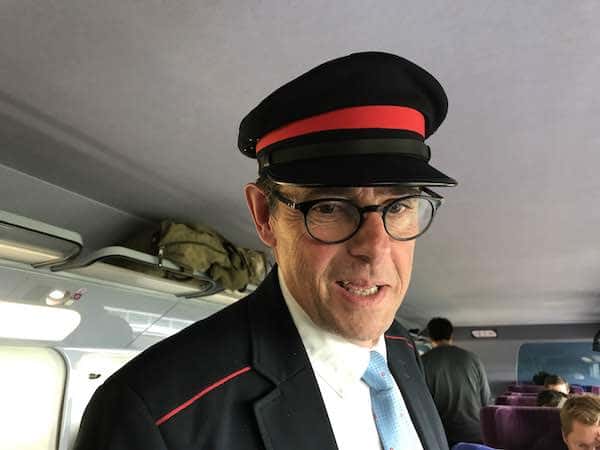 Once onboard, there were plenty of options to make time pass quickly. Of course, your eyes are drawn to the large windows framing the beautiful countryside as the train moves by at a speed of approximately 180 miles per hour. The ride was surprisingly smooth and bump free compared to the subway or Metro North in New York City, or even the Acela Express on the northeast corridor.

But there was plenty of competition for our attention onboard:

Screenshot of Wi-Fi homepage on the TGV train

Each car has racks to store your luggage and restrooms located at the end of cars. If you do want to nap and miss the trip, you can simply pull down the window shade beside your seat.

You won’t find any boom boxes or strap-hanging dancers on this train. Most of the passengers traveling the fast train from Paris to Lyon seemed to be daily commuters. The typical uniform for a businessman: a beautifully tailored blue blazer and jeans.

One passenger came forward from the other end of the car and told us about his favorite bouchon (typical Lyonnais tavern) in the city. Then a kind gentleman behind us discretely passed us a piece of paper with the names and addresses of three of his favorite restaurants written on it. 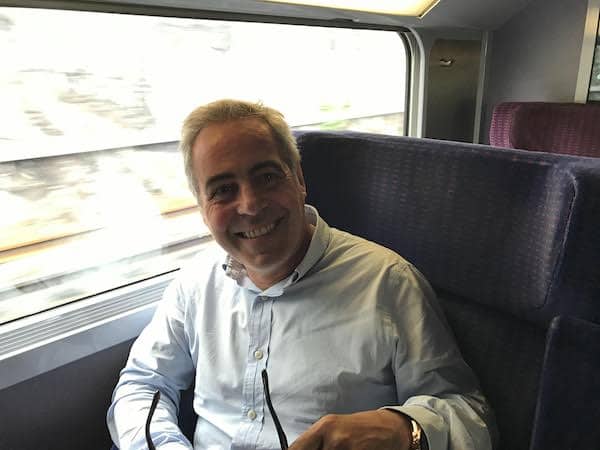 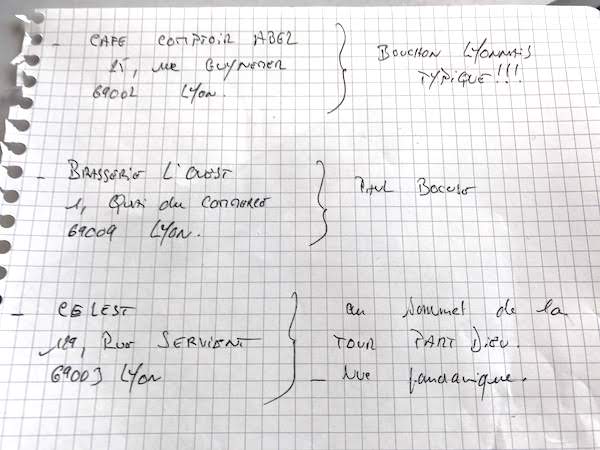 The recommendations we received on the train

A convenient taxi stand was just outside the train station with waiting vehicles. (You can also use Uber in Lyon.)

Our only complaint: Our time on the comfortable, relaxed fast train from Paris to Lyon passed all too quickly.

Before we knew it, we were at the Lyon-Part-Dieu station. But we were eager to re-explore one of our favorite cities and try out the restaurant recommendations from the locals we had met on the train. 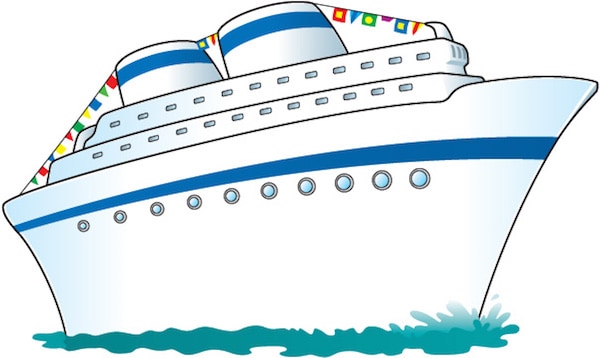 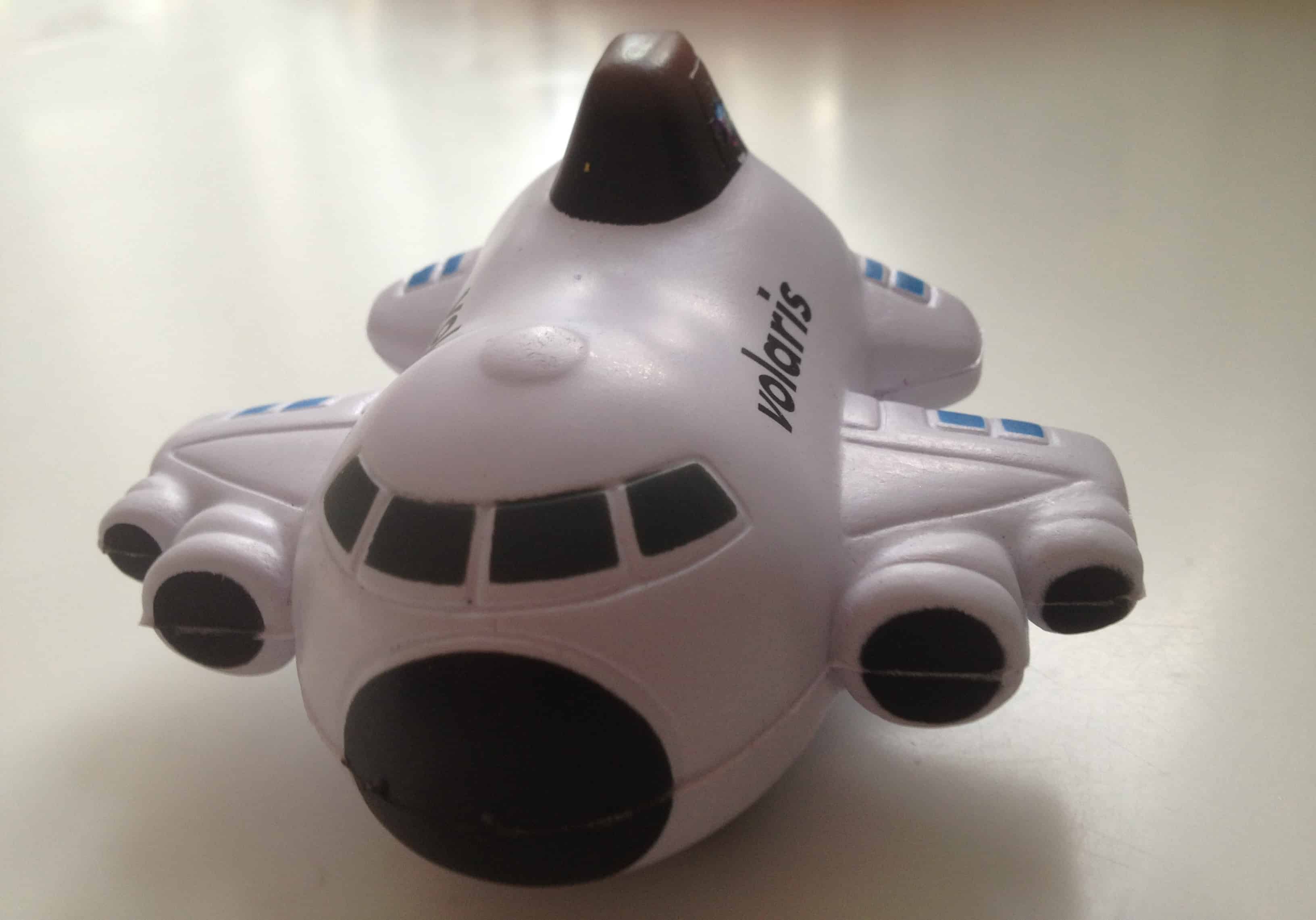 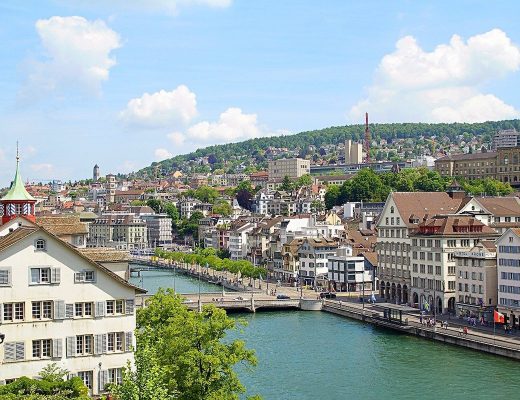 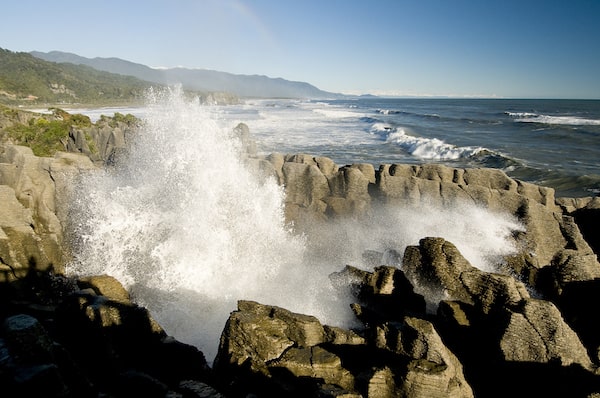 Getting Off the Beaten Track in New Zealand with Ena