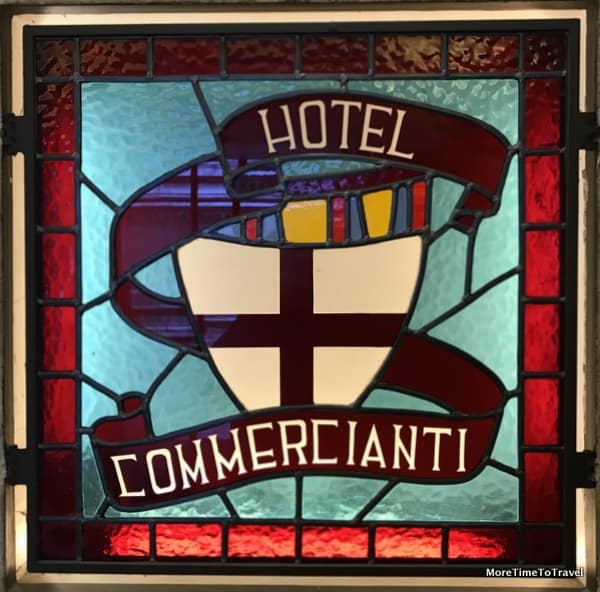 There is so much to experience in Bologna (the capital of the Emilia Romagna Region of Italy) that most visitors will want to stay as long as time and money allow. 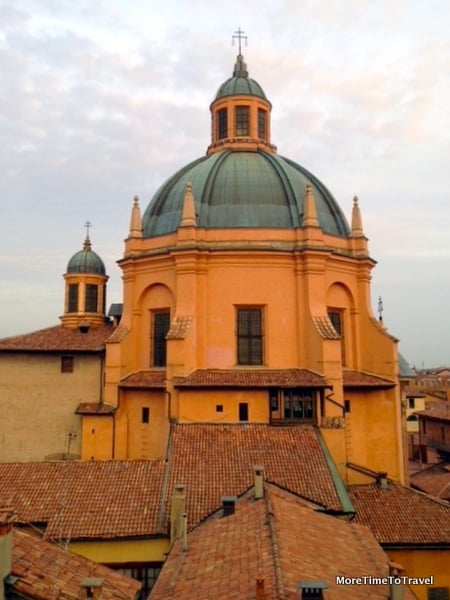 One of the beauties of Bologna: The Sanctuary of Santa Maria della Vita

Culinary and wine options (whether they are restaurants, cooking classes, or the farms and food producers that make some of the world’s finest DOC- and DOP-protected food products) are copious in a region that even Italians agree has the best food in a food-obsessed country. 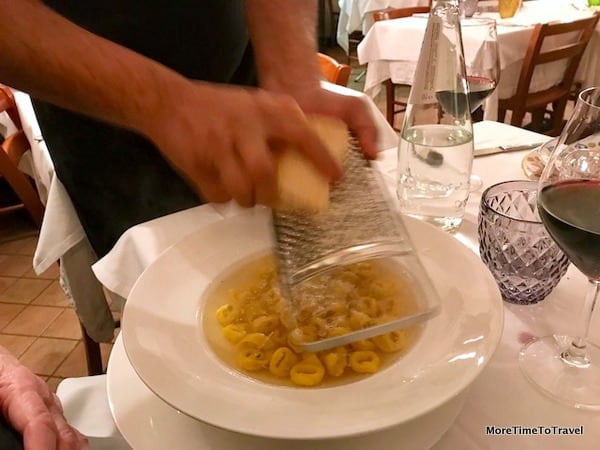 Bowl of Tortellini en Brodo at Da Nello: Bologna is the birthplace of tortellini and tortelloni

The number of cultural offerings is impressive (with more than 50 museums alone, and countless other cultural and historical attractions).

High-speed trains leaving from the city’s Bologna Centrale Railway Station make it possible to take day trips to world-class cities such as Florence, Milan, Ferrara, Ravenna and Verona. Visitors to Bologna should also allot sufficient time to aimlessly wander around to fully enjoy this vibrant and engaging four-season city.

Why a serviced apartment linked to a hotel?

When we plan an extended city-stay, we usually opt for an apartment rather than a hotel: An apartment generally affords more space than a single room, and allows for cooking or bringing food in so you don’t have to eat out three times a day.

During a previous visit to Bologna with friends, we rented an apartment from a local agency and found ourselves plagued with unexpected (and disruptive) plumbing problems (no shower or running water in the bathroom). Inconveniently, these problems had to be remedied over several days during our stay.

The apartment didn’t have daily maid service so we had to do some housekeeping, including hauling bags of garbage to trash and recycling receptacles located several blocks away.

We decided that “next time” we wanted the best of both worlds for a stay in Bologna: the amenities of a luxury hotel and the spaciousness and privacy of an apartment.

The apartments at Art Hotel Commercianti 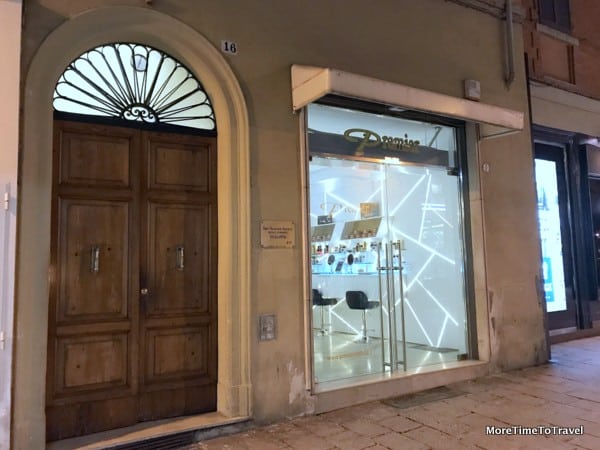 Front door of our apartment at Art Hotel Commercianti

The hotel is part of a family-owned and managed brand, Bologna Art Hotels, which includes two other hotels: the four-star Hotel Novecento and the three-star Hotel Orologio. (We have now stayed at each of these three properties.) All of them are housed in well-maintained historic buildings, enhanced by museum-quality paintings and sculptural art displayed in rooms and public spaces. 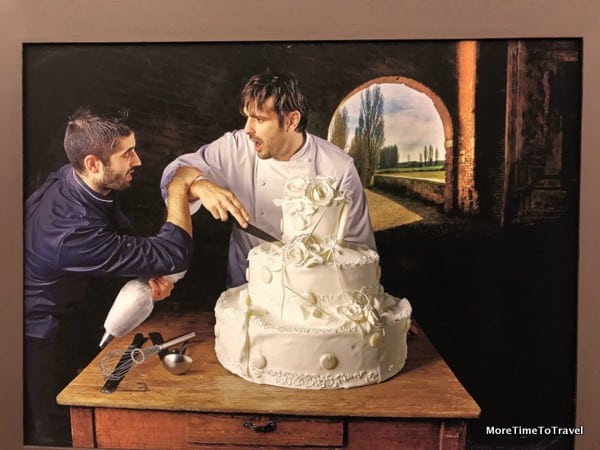 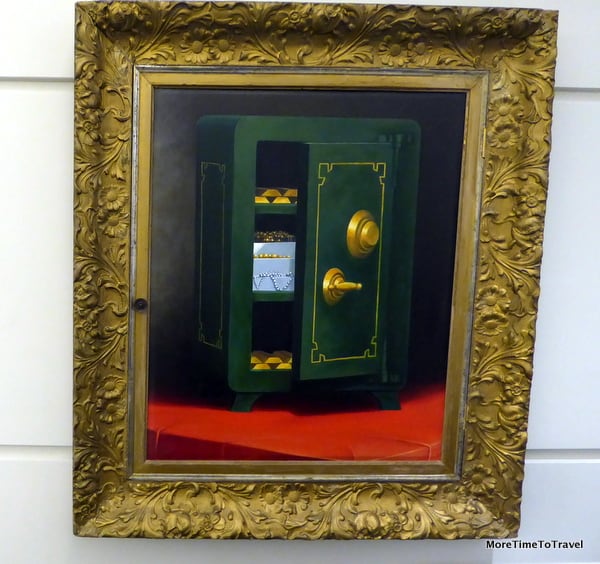 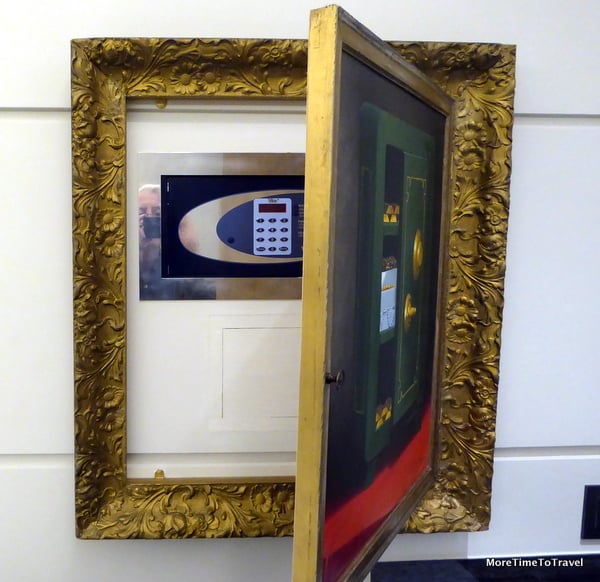 …the painting should have been a give-away

Hotel Commercianti is housed in a medieval building from the 13th century that couldn’t be more centrally located. It sits beside the Basilica di San Petronio (the main church); just off the Piazza Maggiore, the square that serves as the city’s virtual living room; and a stone’s throw from the Quadrilatero (the ancient food market). This boutique property has 33 guestrooms, a bar, and a restaurant/breakfast room. 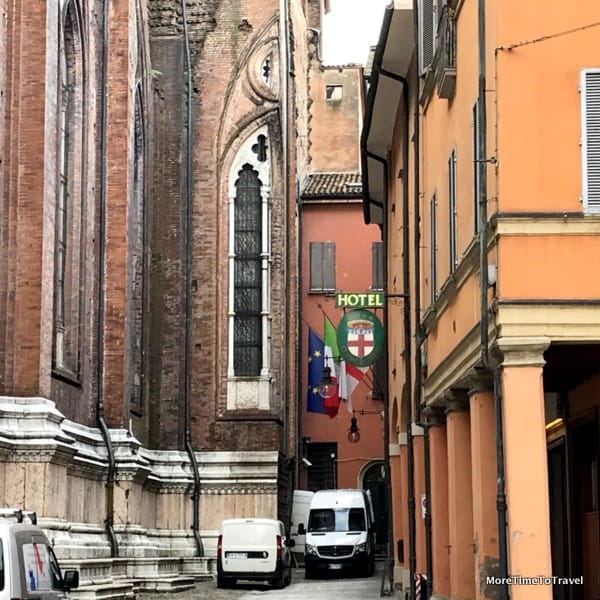 The three apartments are just around the corner from the hotel (80 meters away) in a building on Via d’Azeglio, a popular pedestrian shopping street with boutiques, bars and restaurants. 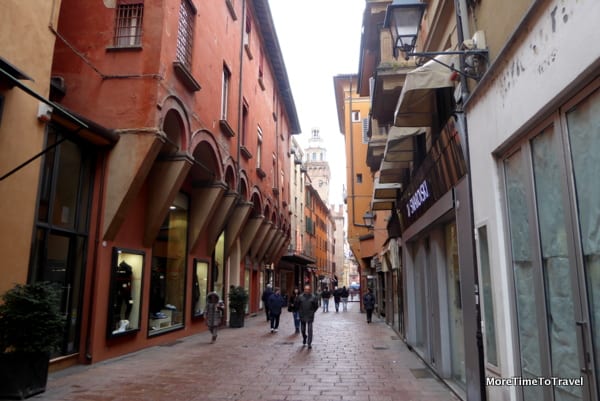 Via d’Azeglio in Bologna during the day 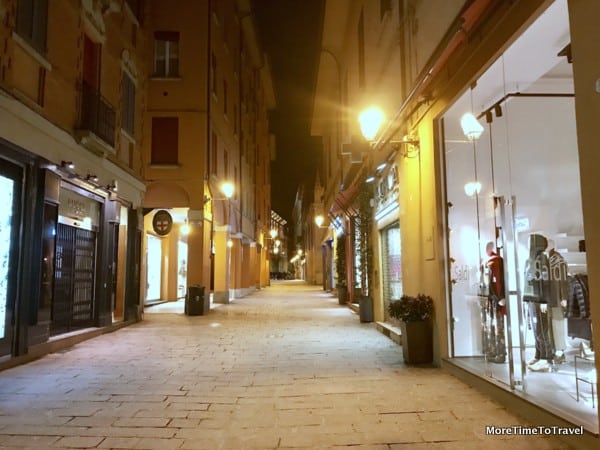 Via d’Azeglio in Bologna at night; without cars or open stores, nighttime noise is minimal

The fully renovated apartment we rented accommodates up to four persons. 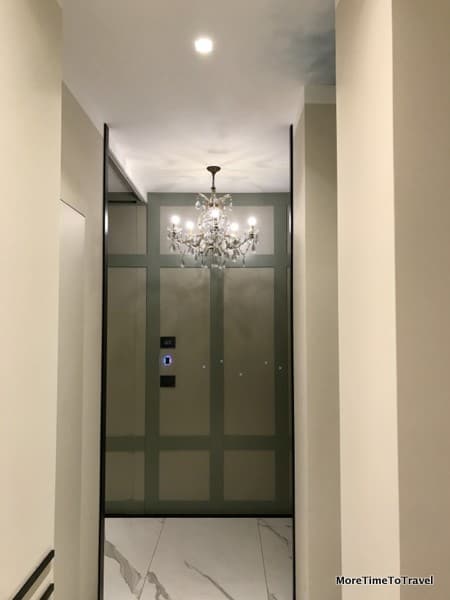 Elegant chandelier outside the door of our apartment

The contemporary room décor, in red, black and white with a touch of whimsy, might be found in an upscale apartment in Manhattan or Milan. 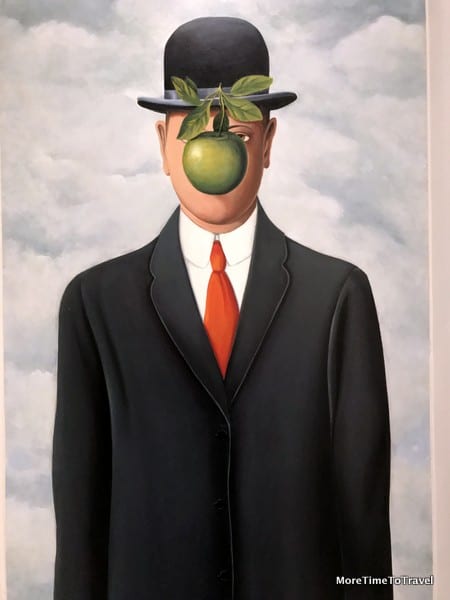 We had a bedroom area, comfortable sitting area with pullout sofa, desk area with a wireless high-speed internet connection, and kitchenette stocked with pots, dishes and utensils for light cooking. Compared to a hotel room, there was much more room to walk around and stow our belongings. 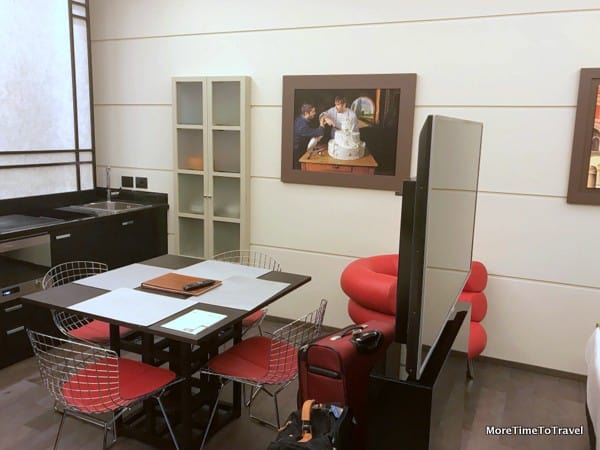 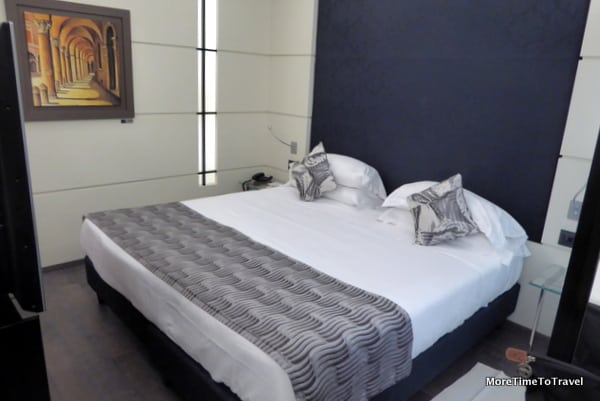 Our sleeping area in the apartment 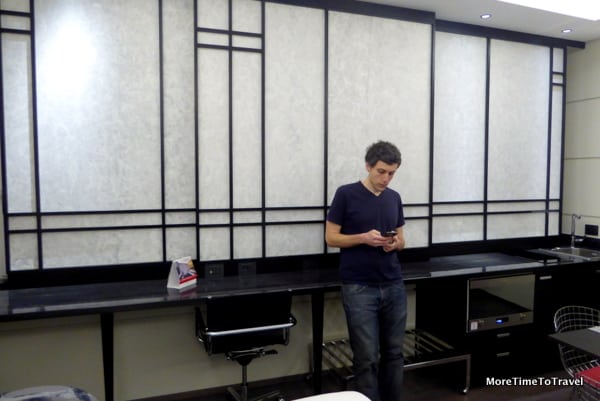 Our son beside the spacious desk area; the sliding shutters open to the outside

A housekeeper came in daily to clean up and change linens. We also took advantage of the hotel’s laundry service (at an additional fee) since our stay there was during the second week of our time in Italy.

Check-in for the apartments is at the main hotel. Each morning, the hotel provides complimentary buffet breakfast between 8AM and 11AM that offers a variety of local products (fruits, cheese, regional breads and cakes, etc.). Breakfasts were as delicious as they were sumptuous. (Daily room rates in Italy typically include a light breakfast but this one was outstanding.) 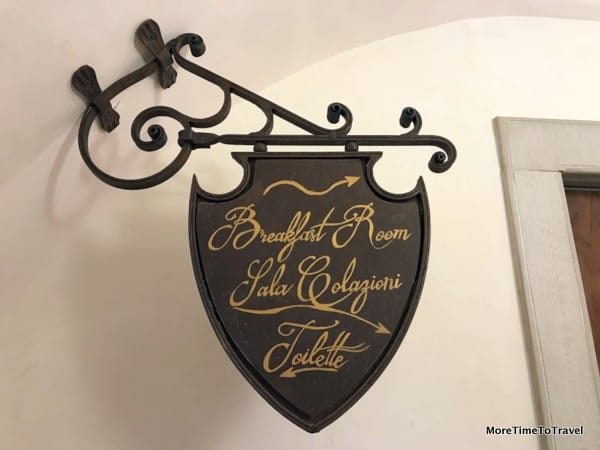 Entrance to the Breakfast Room at the hotel 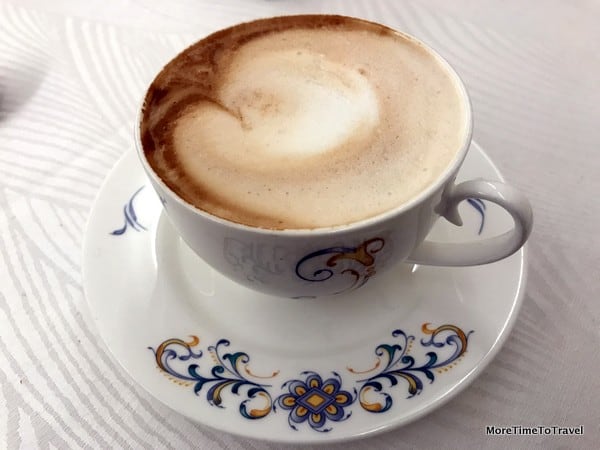 Waking up to cappuccino at the Art Hotel Commercianti 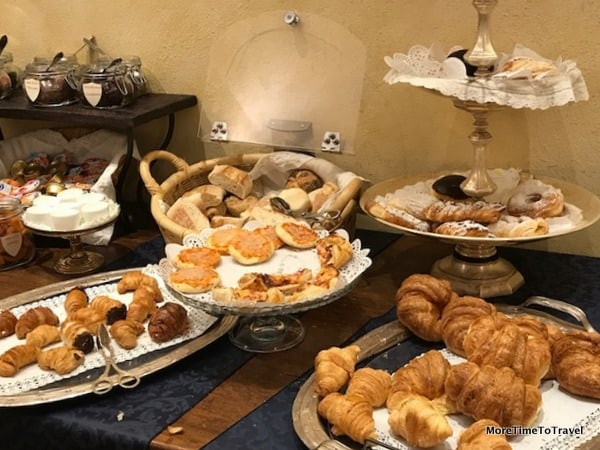 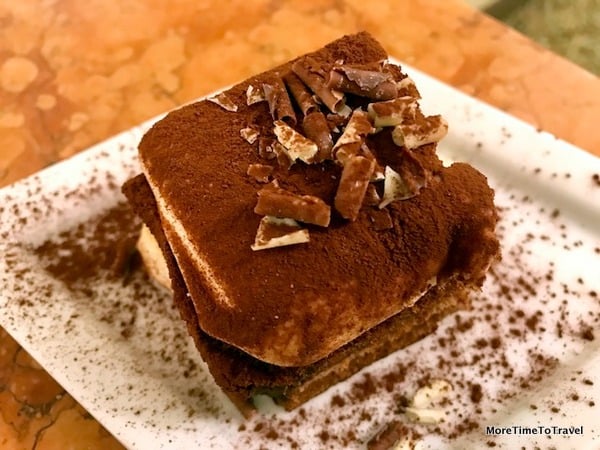 It was also reassuring that we could pick up the phone in our apartment 24/7 in case we needed help with anything (e.g. reservations, finding out about tours, etc.). The hotel staff were all very friendly, seasoned and accommodating.

If you are planning to stay in Bologna for more than a couple of nights, an apartment is a reasonable choice. The apartments at Art Hotel Commercianti couple the benefits of apartment living with luxury hotel amenities. Being attached to a hotel offers maximum flexibility, too. For example, when friends from Tuscany come to visit in Bologna, it was convenient for them to book an overnight stay at the same property.

The best part: It felt “Bolognese” to have a key to our own front door without walking through a hotel lobby. The apartment also allowed us to enjoy some “take-away” lunches from the local salumeria (delicatessen with cooked and cured meats, cheeses and more) paired with local wines (such as Pignoletto and Lambrusco). 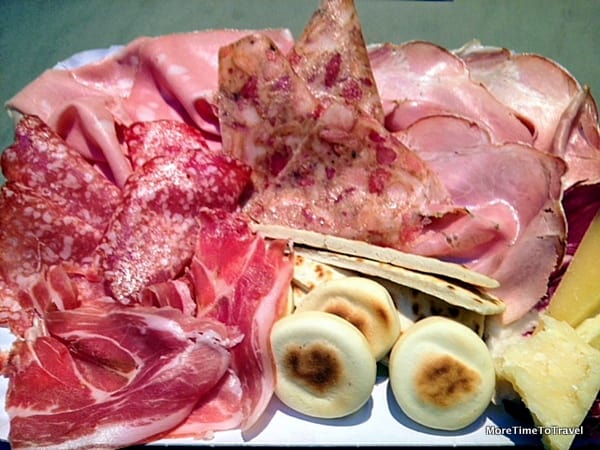 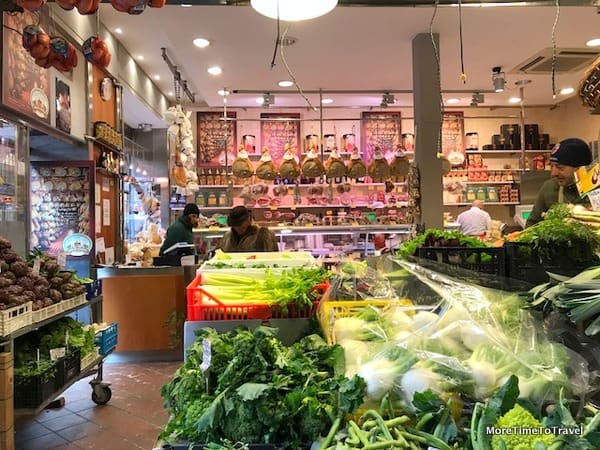 One of the many salumeria in Bologna

We were sad when it was time to ring the hotel’s Bellman to carry our suitcases down the apartment stairs before leaving for the airport. Arrivederci, Bologna!

-Automobile access to the historic area near the Apartments at Art Hotel Commercianti is restricted with one-way and pedestrian streets. The hotel provides explicit driving directions for those arriving by car.

-For a separate fee, the hotel also offers parking garage (a rarity in the historic center) for those who arrive by car. 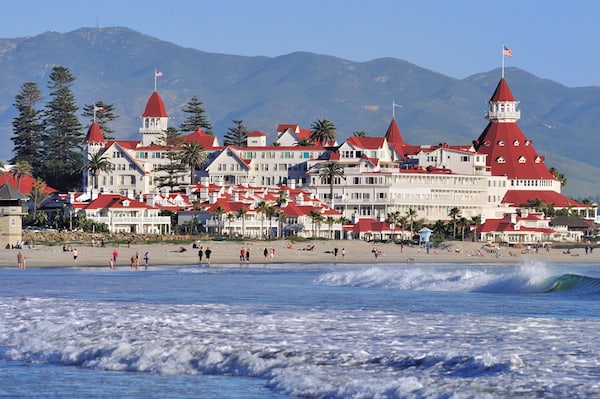 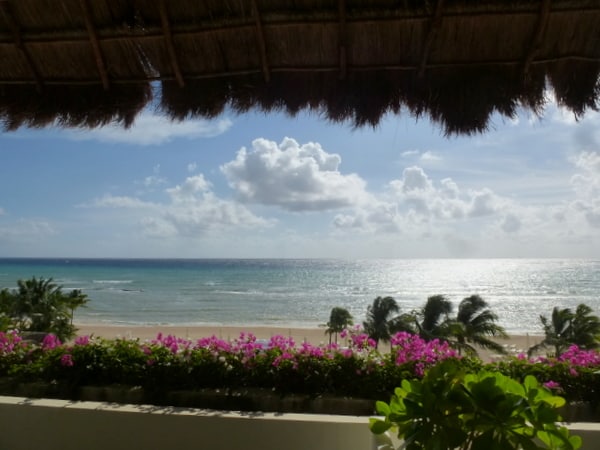 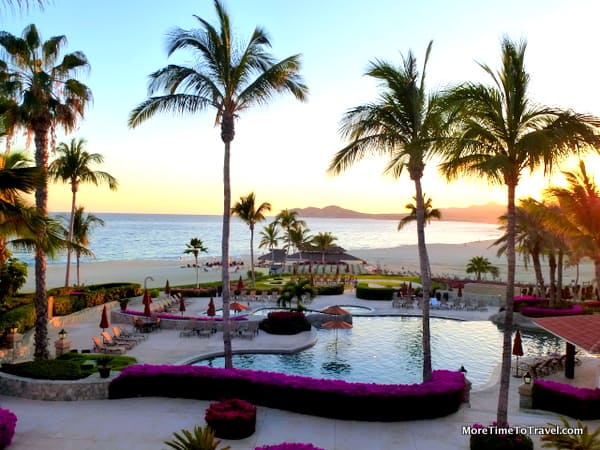 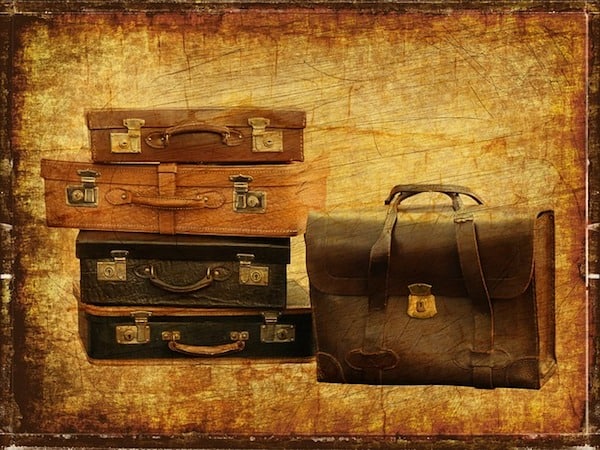 Making the list of Top Travel Blogs: Another reward of travel writing